Checkers Sitari (Somerset West) uses the power of the sun for its operations.

Shoprite Group is strengthening its renewable energy strategy as part of its plans to go offline in the near future.

Africa’s largest grocery retailer is now generating a significant amount of electricity – 12,300 MWh, enough to power more than 1,100 households – after installing photovoltaic panels on the roof at several locations in South Africa and Namibia.

To reduce the company’s impact on the environment, the group claims that it has 18 branches throughout South Africa and Namibia that use the power of the sun for their operations.

As SA continues to grapple with the crippling economic impact of the energy crisis, more homeowners and businesses are looking for renewable energy solutions to bypass Eskom’s frequent load shedding and power outages.

More and more companies around the world are joining the sustainability movement in large numbers. A trend where they have introduced environmentally friendly energy practices as part of their vision for protecting the environment.

According to Shoprite, the largest solar installation initiative is at their Basson distribution center in Brackenfell, Cape Town, which has enough solar panels to cover an entire football field.

The distribution center has 7,706 m2 of panels that generate 1 MW.

“At Shoprite, we recognize that climate change poses direct and indirect risks to our business and the communities we serve,” said Sanjeev Raghubir, sustainability manager for the Shoprite Group.

“That is why we are taking measures to make our planet easier to pedal. In addition to these solar panels, we have also signed an agreement that the group will purchase 434,000 MWh of renewable energy per year for the next seven years. This is arguably the first store of its kind in Africa. “

According to Shoprite, the newly signed contract with an independent power company will reduce the retailer’s indirect emissions by 25%. 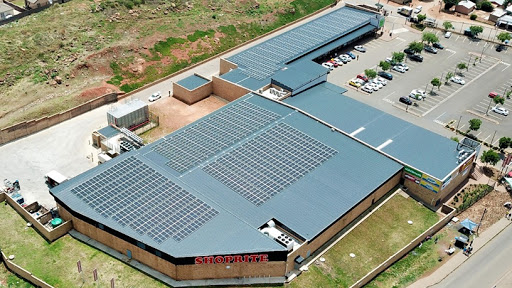 In 2019, Makro signed a 20-year management contract with local renewable energy fund Nesa Investment Holdings to install solar panels on the roof of its various businesses, including Woodmead, Riversands and Carnival, and to meet much of its energy needs throughout the year Day.

During his state of the nation speech last week, President Cyril Ramaphosa said renewable energy has the ability to alleviate the pain of load shedding.

As part of the measures to eliminate the electricity shortage in South Africa, the government will launch a call for proposals for 2,600 MW of wind and solar energy within the framework of Bid Window 5 in the coming weeks.

Shoprite is running several other initiatives, including solar panels for delivery trucks, and has replaced fluorescent lights with energy-efficient LED lights to further reduce the company’s impact on the environment.

Shoprite said the company recently received an A for its climate change and water safety claims on the globally recognized Carbon Disclosure Project platform.