Utility, industrial, commercial, and government establishments are increasingly turning to battery energy storage systems (BESSs) in a variety of sizes and power outputs to obtain reliable backup power, avoid peak load charges, and store energy generated by renewable energy systems use at a later date. According to a report by Market Research Engine, the market is projected to exceed more than $ 9 billion by 2024, with an average annual growth rate of 34%.

Given the expected growth in this sector and the fact that most BESSs have been developed by joining a series of lithium-ion (Li-ion) batteries, the industry continues to focus on actions that can help each potential as well how to exclude dangerous thermal out of control conditions.

Thermal runaway occurs when excess heat, caused by defects, mechanical breakdowns due to damage, or improper operation of the system, creates a reaction that further increases the temperature. If the integrated system protection or the battery management system (BMS) does not select the check box, this process can further increase the temperature and pressure until the battery cell bursts, which can lead to fires in affected and adjacent cells.

Fortunately, early detection systems have been developed that can now detect a unique pre-cursor thermal runaway event – an outgassing in the battery cell that occurs up to 30 minutes before a cascade fault. This distinctive and recognizable early warning sign makes it possible to mitigate the problem or to shut down the system before a thermal runaway can even begin.

Although virtually all high quality BMS devices monitor temperature and other variables to prevent thermal runaway by triggering protective measures before temperatures change unexpectedly, early detection of degas provides an important additional layer of protection for the entire system, the facility and even the staff.

“There are hundreds if not thousands [BESS] Systems already in use where the failure of a single cell can lead to the loss of the system. The ability to detect cell failure before thermal runaway occurs – and stop it – could literally save the system, adjacent properties and lives, ”said Nick Warner, Principal Engineer and Founder of Warner Energy Storage Solutions, and co- Co. Founder of the Energy Storage Response Group. Warner is an internationally recognized expert in the security, testing and technology of energy storage systems.

According to Steve Cummings, director of sensors at Nexceris, a developer of gas sensors and monitors, early detection of thermal runaway relies on four consecutive phases of Li-ion battery failure. The company worked with the U.S. Navy a decade ago to develop a detection technology for Li-ion BESSs that would later be commercialized in a product called Li-Ion Tamer, which is compatible with all Li-ion chemicals.

“A Li-ion battery cell only fails when it is exposed to abuse factors such as heat, overvoltage, etc.,” says Cummings. “The second step is outgassing. The third step is smoke and the fourth step is fire. However, smoke and fire often occur almost simultaneously. When smoke is detected, the thermal runaway has usually already started. “

Degassing usually occurs due to breakdown of a Li-ion battery cell electrolyte due to pressure build-up. Later the temperature rises, smoke is generated and fire breaks out.

To enable degassing detection at the earliest stage of a battery event after initial abuse, the Li-Ion Tamer System features a battery exhaust monitor and sensor network specially designed for lithium-ion batteries.

Since the system can detect degassing in the concentration range at ppm level, it can detect individual cell defects without contacting the cells. This enables measures to be taken to prevent thermal runaway and its spread to neighboring cells as soon as an individual battery cell fails. 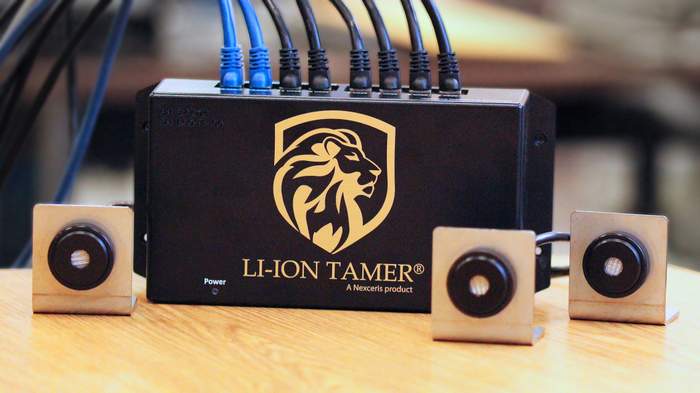 “Early detection could help prevent thermal runaway before take-off, particularly in connection with failure of the active primary control system,” said Warner of Warner Energy Storage Solutions. “When I was testing the Li-ion tamer system, the impending failure was detected at least 12 minutes before it occurred. I have found some of the most common failure modes to provide the earliest possible warning of an impending failure, and I consider them to be best practice techniques. “

When working with Tier 1 providers, it is typical to have a well-integrated BMS with enough sensors to properly monitor various aspects of Li-ion consumption, including the state of charge of individual cells and the temperature in the system. However, this may not be the case if they are tier 2 or 3 suppliers who only sell batteries and leave the BMS to the engineering, procurement, construction (EPC) contractor.

“[Lower end, offshore] Battery manufacturers have generally moved from monitoring every small group of cells to having a thermocouple that runs an entire module and monitors dozens of cells, ”Warner says.

“As a result, the battery management system relies entirely on a voltage indicator to identify problems with the cells,” he adds. “In many cases, however, the voltage is not the perfect indicator that something is possible in the cell.”

Even with qualified tier 1 battery suppliers, Warner recommends an independent, redundant system such as Li-Ion Tamer. Just as seat belts and airbags together can reduce the risk of injury in a car crash, such an approach can help a qualified EPC incorporate additional complementary safety measures into a safer and more comprehensive solution.

Warner notes that the detection system’s sensitivity to outgassing Li-ion electrolytes is much greater than that of conventional sensors for other types of gas monitoring.

“Most sensors that detect gases look for either a generic hydrocarbon gas or a generic gas level and only detect in one physical location,” Warner says. “The value of a Li-ion tamer sensor is that it specifically looks for the gas that Li-ion batteries give off. It’s incredibly sensitive and can detect it at much lower levels than any other sensor. “

Another advantage of such an advanced Li-ion specific system is that it is designed as a network of sensors, which improves its effectiveness in Li-ion exhaust detection. “Since multiple sensors can be used, it is much more effective at detecting gas as it spreads around the container. So if degassing occurs, it is recognized immediately and an alarm is sent. “

According to Warner, the Li-ion-specific system is also less expensive than conventional stationary gas sensors.

“Typical stationary gas sensors should normally have two or three installed and cost between $ 1,500 and $ 4,000 each,” says Warner. “But they only measure at a certain point. If you want to expand that, you’ll need to buy 10-20 and install it. Then you have to activate each one individually to control the system, which increases the cost. “

Due to the advantages of Li-ion BESSs together with Li-ion-specific exhaust gas detection systems, more and more institutions are installing them together.

EPRI’s $ 2 million contract with NRI was signed in August 2019. The project is funded in part by the California Energy Commission’s Electric Program Investment Charge (EPIC) and the Department of Defense’s Environmental Technology Certification.

Microgrids are small electrical systems that can be operated both independently and in conjunction with the larger local power grid. Microgrids are increasingly being used in critical, non-military facilities such as hospitals, fire stations and airports to provide uninterrupted power in the event of local power outages.

The project’s microgrid will utilize solar power and the BESS along with naval site generation to provide emergency support for power failure recovery, disaster recovery and weather / fire storm response.

Each NRI BESS is based on lithium ions and can deliver 250 kW of power if required. The two microgrid BESSs are being tested at the Port Hueneme Naval Base in Ventura County, CA. They will then be tested in a data center of the Naval Surface Warfare Center division in Port Hueneme, Southern California, and put into operation.

“For our military, mobile energy storage microgrids provide an easily available, quiet power and energy reserve that military decision makers can use in their day-to-day operations,” said Jay Bellows, President & CEO of NRI. “This solution provides customers with reliable power, keeps our troops safer, allows operational flexibility and enables the effective integration of modern renewable resources into legacy equipment such as backup diesel generators wherever necessary.”

On the recommendation of EPRI, NRI integrated the marine-approved exhaust gas detection system as a redundant safety solution and fire protection / extinguishing system on board into the system monitoring control of the device.

“We always take safety improvements seriously when installing lithium batteries around the world. Although we use the highest quality battery modules on the market today, we will always take additional steps to ensure we have as many levels of protection as possible. “Says Bellows.

Metropolis of Camarillo, California, strikes ahead with 5 hybrid microgrids at…

Metropolis of Camarillo, California, strikes ahead with 5…